Back to page
View source

Little Miss Scary and her friends become stranded near a haunted house and encounter some spooky monsters including a mummy, a vampire and a werewolf! But when Mr Jelly accidentally chooses Big Foot's boot as his hiding place from the monsters, he learns that not all monsters are as scary as they seem.

Little Miss Scary, Mr. Jelly and their friends are all in for a night to remember when Little Miss Scary's car breaks down near a haunted house on their way to the funfair. They decide to go into the haunted house to see if they can get help and to their horror they find that Frankenstein's Monster lives in the house and they flee into the library, where Mr. Tickle finds a ghost whom he fails to tickle.

Eventually they regroup and run into the kitchen but the minute they see a slime monster, they run out, but Mr. Messy is not fast enough and gets covered in slime.

Mr. Jelly, having gotten separated from the others because the others were way too fast, finds a giant boot and the boot turns out to belong to a Sasquatch who actually gets scared of Mr. Jelly and Mr. Jelly comes to a realization about the monsters...

...But then it turns out the monsters aren't out to kill them and just wanted to have tea with them. After tea is over, Frankenstein's Monster gives them some fuel to get to the funfair. However, when they get to the funfair, Little Miss Scary decides that they should simply go home, feeling that she and her friends had had enough scares for the night. 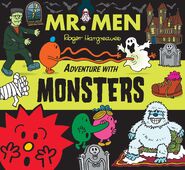 https://www.youtube.com/watch?v=Yf-Y3KgFfg8 (link to the story)