Mr. Men - The New Pet is an entry of the Everyday series. It was released in February 2017.

Poor Mr. Muddle. He's feeling left out because all the other Mr. Men have pets except for him. While some of the pets suit the their owners, for example Little Miss Chatterbox has a parrot which she can talk to day and night, some actually don't suit the owners. For example, Mr. Sneeze has a fluffy cat that triggers his sneezes.

And some of them mess up with their pets! For example, Mr. Topsy Turvy built a very topsy-turvy hutch for his rabbit.

Mr. Muddle decides to go to the pet store to decide on a pet but there's so many that he can't make up his mind!

Fortunately he finds a helping hand in Mr. Nonsense who suggests he buy a puppy which is what Mr. Muddle does.

And it turns out to be a Nonsenseland puppy that goes "Moo!" instead of "Woof!" 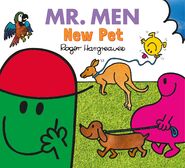 Add a photo to this gallery
Retrieved from "https://mrmen.fandom.com/wiki/Mr._Men_-_The_New_Pet?oldid=60737"
Community content is available under CC-BY-SA unless otherwise noted.