The Mr. Men and Little Misses are having dinner at Little Miss Splendid's mansion, when Little Miss Splendid brings up the idea of going to Paris. It's her dream holiday! Mr. Happy agrees and wishes to see the art galleries. Little Miss Star wishes to see the Opera House. Little Miss Sunshine wishes to see the monuments, and Mr. Greedy wishes to eat as much cheese as he can. When they arrive in Paris, the first thing that happens is that Mr. Noisy rings the bells of Notre-Dame, frightening Mr. Quiet! Then they go to the world famous museum, the Louvre to marvel at the paintings, such as the Mona Lisa, who is known for her mysterious smile, unlike Little Miss Sunshine who has an adorably peppy smile! That very evening, Mr. Uppity invited the Mr. Men and Little Misses to dinner at a grand hotel where the finest food is served. Mr. Greedy is in seventh heaven when he eats the many cheeses like melted, fresh, blue and stinky cheese! In fact, he ate so much, that when they went on a boat to sail up and down the river Seine, he was so fat, he tilted the boat up and nearly made everyone fall into the river! Then they went to a city square where caricaturists were painting pictures. It turned out that Mr. Rude had a talent for caricatures, even if he is an ill mannered fellow. He drew Little Miss Sunshine with a big nose and a portruding tooth as his picture! Then they had dinner at a restaurant and Mr. Greedy ate so much cheese again, that he dreamed of being on top of the Eiffel Tower. So much so it bent under his great weight! The next day, the Mr. Men and Little Misses did visit the Eiffel Tower, and Mr. Greedy decided not to go up it. They also visited the Arch de Triomphe, bigger than Mr. Greedy's tummy, and tall enough for Mr. Tall to walk under! Then Mr. Nosey and Little Miss Scatterbrain hired a car so they could drive around the steets, but unfortunately, Little Miss Scatterbrain being Little Miss Scatterbrain drove the car backwards in a one way street! However, after much mishaps and mayhem, they did park the car properly and went to a bakery for lunch. Mr. Nosey ate a baguette sandwich which was as long as his nose! Mr. Greedy on the other hand ate a cheese sandwich, a cheese soufflée, and even a cheese omelette. Then he slept and dreamed about going to the opera. Mr. Greedy was singing on stage, and the floor broke under his great weight! That very evening, the Mr. Men and Little Misses went to the Garnier Opera House. Mr. Greedy decided to stay behind. Just in case. And on the very last day of all, Little Miss Splendid's dream had come true! She went shopping at a huge store and visited all the shops of the famous designers, and bought hats. Loads of them! And more! 52 hats to be exact! One for each week of the year! Then it was time to go home. At the airport, Mr. Greedy looked at the plane. Then he looked at his tummy, then the plane again. And then he thought of all the cheese he had eaten. So instead, he took the train home. Just in case. 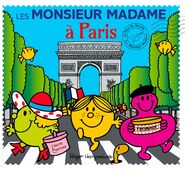 https://www.youtube.com/watch?v=VaJALSoboCY (link to the story)