Mr. Messy was always messy, he leaves messy fingerprints wherever he goes. He lives in a house with broken windows, paint that is peeling off, missing tiles from the roof, and a dirty garden. His routine was leaving everything dirty as well. One day he finds a neat and pretty-looking house with a lovely garden and a stream running through the middle of it. He met two people who live in the house - Mr. Tidy and Mr. Neat. They go to Mr. Messy's house to tidy it up and make it look nice and tidy. After they cleaned the house and its garden, they gave the owner a bath and removed the scribbles from him. He looked clean afterwards, and thinks he has to change his name.

In the 2008 TV series The Mr. Men Show, Mr. Messy is given blue and white sneakers (similar to Little Miss Chatterbox's, only with patches of dirt on the toes and one of them is untied) and he has a unibrow now, and his limbs are also made solid, instead of scribbled like they were originally. In the episode Library, Mr. Messy became a full circle like in his story, but he retains his solid limbs and gains a curl on the top of his head.

Mr. Messy is even messier than in the books, living like a complete slob and eating out of the garbage. He seems to have ablutophobia, the fear of being clean, although he is okay with brushing his teeth. He lives next door to Mr. Fussy in a duplex-style house. He also owns a pizzeria and hosts a show on Dillydale F.M. called Shazam, That's Good! where the Mr. Men and Little Misses show music videos. His catchphrases are "Shazam!" (similar to Emeril Lagasse's "Bam!"), "That's what I'm talkin' about!", and "Messy, not Dressy!" (heard on the official website). He is quite good at rapping.

Mr. Messy's accent in the UK is Liverpudlian, and African-American in the U.S. In the U.S. version, he is voiced by Peter Rida Michail, who is also the show's production designer.

That's what I'm talkin' about! 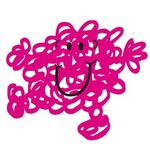 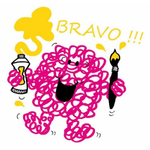 On the set of Shazam, That's Good!

Mr. Messy gets caught by Mr. Persnickety for eating out of the trash in the middle of the night