being messy and dirty, host of Shazam, Thats Good!, Artist

Mr Neat and Mr Tidy turned Mr. Messy’s life around and made him neat and tidy! The two men “brushed, swept, polished and scrubbed” his house until it sparkled. And after they’d turned their attention to Mr. Messy, and bathed him, he looked in the mirror and remarked: “I’m going to have to change my name!” but then once they left he threw a fit and started being messy again.

Messy has a unique design, being a scribble instead of a distinctive shape. His classic appearance made his limbs equally messy. In the cartoons, he is given a slight lips and his scribbled body is in constant motion.

In the Mr. Men Show he has a pair of shoes, straightened limbs of which his arms disappear within his body the moment they are not in motion and his scribble body is static. Like many characters in the art style, he is given a mono-brow.

Catchphrases: Shazam!, That's what I'm talkin' about and Messy! Not Dressy (in the website) 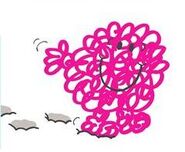 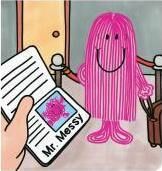 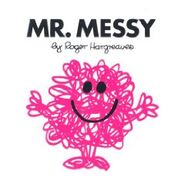 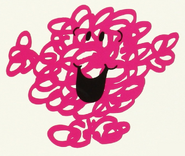 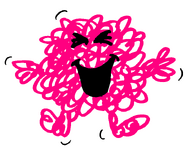 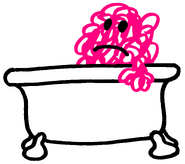 Mr. Messy hates baths
Add a photo to this gallery

Retrieved from "https://mrmen.fandom.com/wiki/Mr._Messy?oldid=47797"
Community content is available under CC-BY-SA unless otherwise noted.