Mr. Messy Messing About in the Snow

Mr. Messy Mssing About in the Snow is the eleventh book in the Mr. Men New Library series.

Mr. Messy is such a messy person, he would never dare clean up! So when he looked out of his filthy windows, he had noticed it had snowed! But did he know that? Never ever. When went out into the snow, he stepped on a rake what was well hidden for over 3 years. His shed is very messy too, full of unwanted junk! He decided to get out his toboggan and race down the hill, leaving a mess everywhere. He left toboggan marks in the snow, he left his messy fingerprint trail everywhere, and he even made a filthy looking snowman! All in all, it had been a messy, not dressy day for Mr. Messy.

Mr. Messy (does not speak) 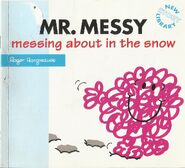