Mr. Mischief is the thirty-sixth book in the Mr. Men series by Roger Hargreaves.

Mr Mischief plays tricks on everybody—he breaks Mr. Happy's chair by sawing the parts of it to bits with a saw, gives Mr. Greedy a rather unusual and rather disgusting cake that he baked him in which the chocolate is really mud instead of chocolate, the cream inside is really cotton instead of cream, and the icing is really toothpaste instead of icing, he even puts jam into Mr. Funny's hat! How very mean and naughty! One day Mr. Mischief tries to steal a wizard's wand, but what he doesn't know is that magic wands dislike being seized, but the wizard stops him and teaches Mr. Mischief a lesson by turning the tables on Mr. Mischief such as turning his porridge that he made himself for tea into sawdust, breaks his chair for revenge by sawing the parts of it it to bits and putting raspberry jam into his bed. By the end of the story, Mr. Mischief is as good as gold until he cuts Mr. Fussy's moustache in half! It just goes to show that sometimes, Mr. Mischief being Mr. Mischief, he really "just can't help" being mischievous!

Mr. Mischief appears under the titles

These are other places the Title character appears in. 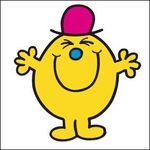 Oh, mischief! Glorious mischief! I do so love it!

"Which foot do you put down first? The right one? or the left?"

"I think I'm going to win the race"