Mr. Mischief - A Spot of Trouble is the tenth book in the Mr. Men New Library series.

When Mr. Mischief catches the measles, he thinks of a good prank. He would love to spread his illness around Misterland, but when Mr. Happy comes over to give him some grapes, Mr. Mischief is surprised to see him well! Mr. Happy tells Mr. Mischief that he can only catch measles once, leaving him speechless! 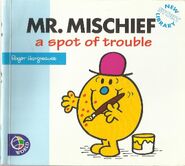 The First Edition
Add a photo to this gallery
Retrieved from "https://mrmen.fandom.com/wiki/Mr._Mischief_-_A_Spot_of_Trouble?oldid=52700"
Community content is available under CC-BY-SA unless otherwise noted.