Mr. Muddle is the twenty-third book in the Mr. Men series by Roger Hargreaves.

Mr. Muddle gets the simplest things messed up. He lives in a house by the sea in Seatown. He was supposed to live in the country, but he, who built the house himself, built it wrong and in the wrong spot. One day he goes fishing with a fisherman named George and does the wrong things and they don't catch any fish. George's technique is to ask Mr. Muddle to do the opposite of what George wants, and Mr. Muddle will get it right. George gets everybody to do this, and Mr. Muddle goes home and cooks himself a muddled-up meal to celebrate.

He was a cameo in the episode, Boats. He was on a lifeboat when the ship sank.

Mr. Muddle appears under the titles 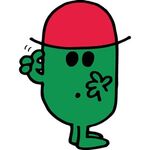 Only Mr. Muddle would put his shoes on like that!

Dear, me! I must've got it wrong again!

He says goodbye to someone when he means hello. 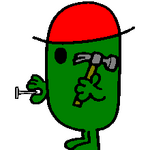 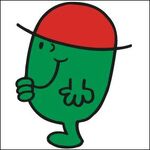 When's the fridge hot? When's the oven cold? When you're Mr. Muddle!