Mr. No/Monsieur Non is part of the Mr Men series of books, by Roger Hargreaves.

Mr. No does not like to agree on anything. He will disagree on anyone and anything. One day he met Little Miss Yes. She invites him to come over to her house for tea, but he declines. As he continues on his way, he feels very sad and lonely as can be. Not even a tickle from Mr. Tickle can cheer him up. Mr. Happy even tells him to be happy, but says no. Little Miss Fun wishes to have fun with him too, but he doesn't want to do that. Then Mr. No had an idea! He buys a bouquet of flowers and gives them to Little Miss Yes. He then decides to have tea with her after all.

He was once a character for the Mishaps and Mayhem app.

This is a list of titles for this book being published internationally. 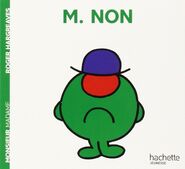 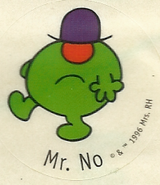 Mr. No sticker from 1996
Add a photo to this gallery
Retrieved from "https://mrmen.fandom.com/wiki/Mr._No?oldid=52299"
Community content is available under CC-BY-SA unless otherwise noted.