This article is a stub.

This article is missing information. You can help Mr. Men Wiki by expanding it.

For the France-exclusive book character, see Mr. No.

Mr. No is a Mr. Man who appeared exclusively in the app Mr. Men: Mishaps and Mayhem. He most notably featured in Little Miss Scary's minigame in the app. 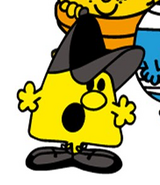 Add a photo to this gallery
Retrieved from "https://mrmen.fandom.com/wiki/Mr._No_(Mishaps_and_Mayhem)?oldid=69357"
Community content is available under CC-BY-SA unless otherwise noted.