Mr. Nobody is the forty-seventh book in the Mr. Men series by Roger Hargreaves. He was the last Mr. Men created and published by Roger Hargreaves before his death. He was originally a special character in 1985, before Adam Hargreaves found his information in the archives and turned him into a character in the regular Mr. Men line up in 2010. In some cases, he is mistakenly called Mr. Invisible.

Mr. Happy finds somebody who is nobody. Mr. Nobody is literally not much of a person. Mr. Happy tried to make Mr. Nobody in to somebody by bringing him to the Wizard. The wizard makes a potion to turn him into a somebody, and turns him yellow by recommendation from Mr. Happy. 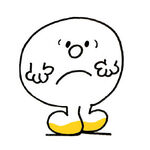