Mr. Noisy the Music Man is the 37th episode of the third season of Mr. Men and Little Miss. It was first broadcasted on 3 September, 1997.

Mr. Noisy keeps everyone awake because he has decided to play in a band and has to practice. Mr. Clever comes up with a wonderful idea to give everyone a bit of peace; why not make him conductor! There won’t be much chance of him making any noise with a baton! 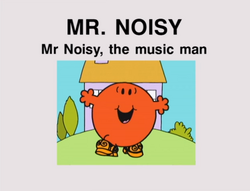