In the 2008 TV series The Mr. Men Show, Mr. Noisy remains relatively the same in looks, though he is given a megaphone-styled bullhorn to emphasize his character trait. He is also slightly darker red, and his great shoes are a darker brown and have no spirals on the heels. He lives next door to Mr. Quiet in a stereo-shaped house. Every time he walks his boots make loud stomping sounds like an elephant. The ironic thing would be that even though he tells people to keep quiet, he is the one making the noise (as proven in Books and Music). In the episode Travel Miss Magic accidentally turned him into a giant, red, loud whale. In the US and UK Versions he is voiced by Richard Epcar and Rob Rackstraw. 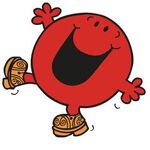 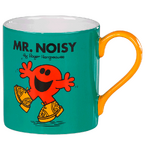 Retrieved from "https://mrmen.fandom.com/wiki/Mr._Noisy?oldid=53695"
Community content is available under CC-BY-SA unless otherwise noted.