Mr. Noisy and the Giant is an entry in the Mr. Men and Little Miss Magic series.

In Mr. Noisy and the Giant, Mr. Noisy makes friends with a Giant.

Mr. Noisy is very loud. He doesn't need a telephone, he shouts at the top of his voice to speak to someone! He shouts so loud that he makes Little Miss Splendid's hair stand on end!

When he tried to shout to Mr. Quiet, he made him jump out is chair.

And the Giant was so big that he had to bend down to look though Mr. Tall's window.

The Giant also tried to say "hello" as quiet as he can to Little Miss Shy but his voice was too loud so it made her run away. The Giant couldn't make a friend...

But he heard Mr. Noisy and the Giant thought it was another Giant but it wasn't. The Giant still made friends with him. Mr. Noisy takes him to loudland hotel but the Giant couldn't fit in his hotel bed. 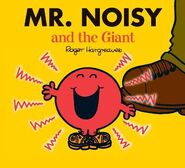 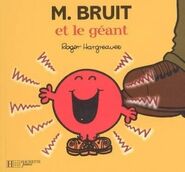 French cover
Add a photo to this gallery
Retrieved from "https://mrmen.fandom.com/wiki/Mr._Noisy_and_the_Giant?oldid=60187"
Community content is available under CC-BY-SA unless otherwise noted.