Mr. Nosey Solves a Mystery is the 5th episode of the second season of Mr. Men and Little Miss. It was first broadcast on 12 February 1996.

Mr. Nosey loves poking his nose into everything and when he reads in the paper that Mr. Worry is looking for a detective to clear up the mystery of his disappearing apples, he rushes round to see him.

Thanks to his flair, the mystery is soon solved: the guilty culprit is Little Miss Trouble, who has stolen the apples and stuffed them with mustard as a prank on Mr. Greedy! Which goes to show that being nosey has its good points! 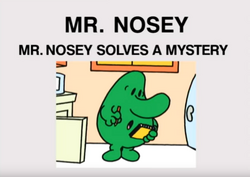