Mr. Quiet is the twenty-ninth book in the Mr. Men series by Roger Hargreaves.

Mr. Quiet lives in Loudland, where everybody and everything is too loud for him. Loudland would be suitable for Mr. Noisy, but not for Mr. Quiet. Mr. Quiet is scared. Whenever he tries to go shopping, he can only whisper what he wants, which results in the grocer, the milkman, the baker, and the butcher to shout "CAN'T HEAR YOU! NEXT PLEASE!" One day Mr. Quiet gets a letter from Mr. Happy to stay in Happyland, where Mr. Quiet gets a job in a library, and where the rule is to always be quiet. Mr. Quiet is so happy he laughs out loud.

In the 2008 TV series, The Mr. Men Show, Mr. Quiet has an egg-shaped instead of round body, is normal sized instead of small like in the books, and his color has been changed from light mustard to light blue. Three of his hairs are gone, and he now has a unibrow.

Like Mr. Bump, Little Miss Whoops, and Little Miss Calamity, he is accident prone. He has a taste for Asian culture, having a zen garden and a collection of Ming vases. He lives in a small shack-like house next to Mr. Noisy. His voice is barely audible, which can cause confusion with some of the other characters. He is often blamed by people when he tries to speak out, but he can't. In the UK and US versions, he is voiced by Paul Greenberg (credited as Aaron Albertus) and Simon Greenall, respectively. He is first seen in Physical.

Mr. Quiet appears under the titles- 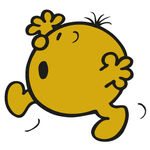