Mr. Rush is the thirtieth book in the Mr. Men series by Roger Hargreaves.

Mr. Rush is always in a rush. He never does anything properly. He is in such a rush he has a terrible breakfast (toast not toasted, water cold), only brushes one tooth, and runs out of the house to go nowhere. He sees an ad for a vacation in a magazine but can't go away because he has no money, so he wants a job to make money. Being a bus driver isn't good, because he doesn't stop at any of the stops, being a waiter isn't good because he'd whisk away the food as soon as he brought it. The job he finds is as a postman delivering express letters, the best job for the fastest thing on two feet. He saves enough money and goes on vacation.

This is a list of other books and episodes of Mr. Men and Little Miss that the title character has appeared in. 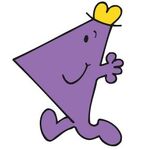 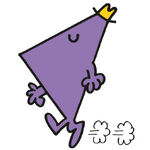 He really has to get away! He's in a rush and cannot stay!