'I am Mr. Silly, weirdo and so funny. Everything that I invent, is always an event.'
— Mr. Silly, Learn to Count with Little Miss Brainy & Discover Computers With Mr. Forgetful

Mr. Silly is the tenth book in the Mr. Men series by Roger Hargreaves.

Mr. Silly lives in Nonsenseland, where the trees have red leaves and the grass is blue. Every year there is a contest for the silliest idea of the year, and Mr. Silly can't think of one. All the animals do human activity and say the wrong sounds. Mr. Silly wins the contest by painting all the leaves on the trees green.

Mr. Silly appears under the titles 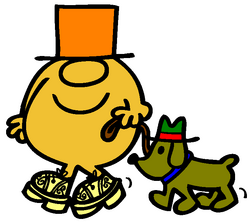