Mr. Silly's Silly Secret is the 34th episode of the third season of Mr. Men and Little Miss. It was first broadcast on 3 September, 1997.

Catching a bus is no easy task when your name is Mr. Silly, since he does everything differently from everyone else, he never waits for the bus were everyone waits and so inevitably misses it each time. After repeated incidents of this type, Mr. Silly comes up with a "silly" idea! He ingeniously builds a car on stilts with wheels, which can pass above the other cars. And it's in this strange machine that he goes shopping under the astonished gaze of the Mr. Men and Little Misses. It then starts to snow and only Mr. Silly's car still works, much to the relief of all the Mr. Men and Little Misses stranded at the bus stop! 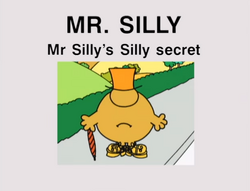