Mr. Silly is the tenth book in the Mr. Men series by Roger Hargreaves.

Mr. Silly lives in Nonsenseland, where the trees have red leaves and the grass is blue. Every year there is a contest for the silliest idea of the year, and Mr. Silly can't think of one. All the animals do human activity and say the wrong sounds. Mr. Silly wins the contest by painting all the leaves on the trees green.

Mr. Silly appears under the titles 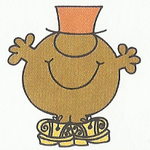 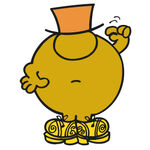 Mr. Silly takes his silly dog for a walk

He's as silly as can be!

Playing tennis with a square ball! Isn't that silly?

Get your silly groove on!

Mr. Silly gets the giggles

Mr. Silly takes his pet chicken for a walk

Retrieved from "https://mrmen.fandom.com/wiki/Mr._Silly?oldid=60999"
Community content is available under CC-BY-SA unless otherwise noted.