Mr. Silly Gets the Giggles is the third book in the Mr. Men New Library series.

When Mr. Silly goes to the hardware shop to by a hole for his tree, the last hole has been sold out. He goes for a walk to think where to buy a hole, but he walks so far he goes out of Nonsenseland and ends up in Sensibleland, where everything makes sense! Little Miss Wise takes Mr. Silly to the hardware shop, but wherever Mr. Silly goes, he laughs at things like people using phones in phone boxes, posting letters in letterboxes, and using umbrellas with no holes in them! And when he arrives at the hardware store, the owner, Ms. Bolt gives him a spade to plant his tree in! When Mr. Silly goes back home to Nonsenseland, he invites Mr. Nonsense over for dinner and tells him about his time in Sensibleland, and Mr. Nonsense finds it hilarious! 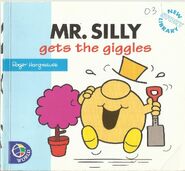 The 1998 cover
Add a photo to this gallery
Retrieved from "https://mrmen.fandom.com/wiki/Mr._Silly_Gets_the_Giggles?oldid=56326"
Community content is available under CC-BY-SA unless otherwise noted.