Mr. Skinny's Incredible Bet is the 17th episode of the third season of Mr. Men and Little Miss. It was first broadcast on 3 February, 1997.

Mr. Skinny has laid a bet that he can get fatter than Mr. Greedy, but try as he might; he is incapable of eating more. He then has a brainwave and asks Mr. Tickle to call on Mr. Greedy and tickle him just as he is about to eat. By the next morning, Mr. Greedy has lost a lot of weight from running away from Mr. Tickle who was tickling him. Mr. Greedy is now indeed thinner than Mr. Skinny. Mr. Skinny has finally won his bet, but not as we might have imagined! 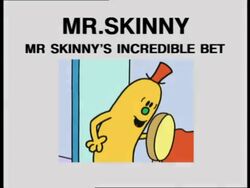