Mr. Slow takes so long to do everything. It took him until New Year to open his Christmas presents, and until Easter to write his thank-yous. He tries to get a job. When he tried to be a news reporter,it took him until midnight to read the news. When he tried to be a taxi driver, he delayed Mr. Uppity in getting to the train station. The last job he gets is driving a steamroller. 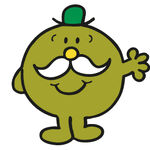 Retrieved from "https://mrmen.fandom.com/wiki/Mr._Slow?oldid=65538"
Community content is available under CC-BY-SA unless otherwise noted.