Mr. Small is the twelfth book in the Mr. Men series by Roger Hargreaves.

Mr. Small is very small, so small he lives under a daisy in Mr. Robinson's garden. He eats very enormous meals with little food, and talks to Walter the Worm about getting a job. He meets Mr. Robinson who tries to get him a job. They try putting mustard in mustard jars in a restaurant, which is not good because Mr. Small keeps falling into the jars. They try putting matches into matchboxes, no good either since he keeps getting shut in the boxes. The best job for somebody so small is writing children's books, and Mr. Small meets a friend of Mr. Robinson who writes children's books (referring to Roger Hargreaves), and writes a book all about himself. This Mr. Men book breaks the fourth wall.

In the 2008 TV series The Mr. Men Show, Mr. Small is considerably larger, is egg-shaped and is an orange color. A tall, black floating top hat replaces his blue bowler, and he now wears a pair of white sneakers.

His best friend is Mr. Nosey, and they live together in a observatory with a large telescope coming out from the roof. He is also small enough to fit under Mr. Nosey's arm.

He is first seen in Physical.

Mr. Small appears under the titles 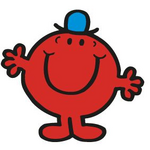 I really am very little! About the size of a pin

As big as a pin 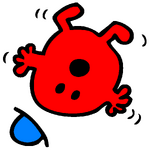 Mr. Small has a little accident

He's so tiny that there's nothing of him at all

Mr. Small as he appears in Mr. Tall's book

Retrieved from "https://mrmen.fandom.com/wiki/Mr._Small?oldid=69629"
Community content is available under CC-BY-SA unless otherwise noted.