Mr. Small - A Big Day Out is the twelfth book in the Mr. Men New Library series.

Mr. Small is tired of being so small, so he sleeps under a tree, and unbeknownst to him, a wizard is sleeping under the same tree too. He casts a spell on Mr. Small, making him grow taller! This makes Mr. Small so delighted he jumps over trees and lakes, gives Mr. Uppity the fright of his life, lifts Mr. Strong, greets Mr. Noisy in the loudest way ever, stands taller than Mr. Tall, and hugs Mr. Greedy! What a big day he had! Then he went back to sleep again. And eventually, he awoke to find out that he had shrunk, but his hat didn't. 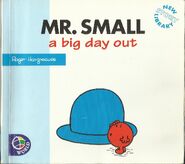 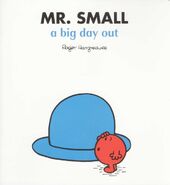 The more recent edition
Community content is available under CC-BY-SA unless otherwise noted.