Mr. Strong is the twenty-sixth book in the Mr. Men series by Roger Hargreaves. He is one of the Mr. Men and Little Miss characters to appear in The Mr. Men Show.

This is a list of Mr. Men, Little Misses and other special characters that appear in this book.

In the 2008 TV series The Mr. Men Show, Mr. Strong kept his red colour, but his shape is a triangle instead of a square in the books, he traded his hat for a brown weight buckle, and he has muscular arms to emphasize his character trait. As shown in the "Beach'n with the Boombox" music video, every Little Miss finds him attractive, though since it's a music video, it may not be canon. In "Beach Party A-Go Go" Little Miss Giggles and Little Miss Chatterbox fell in love with him. His catchphrase is "Aw, pickles!", and he usually says this when he breaks something by barely even touching it. In Amusement Park he seems to be afraid of heights as he comments in a shaky voice on how high they were going. He is seen as a nurse in Boo-Boos. He lives in a house that is white with a black roof, two windows and a door which is seen in some of the episodes. In the US and UK versions, he is voiced by Phil Lollar and Simon Greenall. His US voice is based on actor Sylvester Stallone. 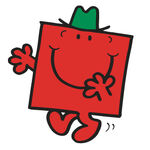 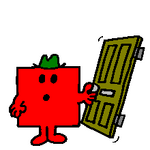 Aw, pickles! I hardly touched it!

Good thing I came along! 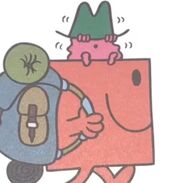