Mr. Strong Makes a Big Splash is the 31st episode of the third season of Mr. Men and Little Miss. It was first broadcast on 3 September, 1997.

Mr. Strong is so strong that he can't find the right job for him. First he worked painting Farmer Fields' barn, but he painted it so hard it fell to the ground. Then Mr. Strong worked as a car washer for Mr. Wrench, he cleaned it so hard that all the paint was washed away. So Mr. Strong works as a computer expert until he typed up hard he damaged it. Mr. Strong was about to give up until he he saw a job wanted at the zoo. Mr. Strong knocked on the door of Mrs. Cage's office (but then the door fell down) and she gave Mr. Strong a job there.

First Mr. Strong swept the monkey pen (but he swept so hard he broke the broom and the monkeys laughed), then he went to feed the panda by opening the bars (but the panda ran out to a bus that goes to China), then he washed the dishes (but he washed it so hard the plates cracked), then he served ice cream to visitors (but he accidentally pushed the ice cream in their face), then he drove the tractor (but he pushed the brakes so hard he fell in the penguin pen). Mrs. Cage finally found a perfect job for Mr. Strong, bathing the elephants. Mrs. Cage is so pleased that she wants Mr. Strong to come to the zoo every Saturday to wash the entire elephant family.

The transcript for Mr. Strong Makes a Big Splash can be seen here. 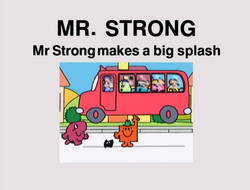