Mr. Tall is the thirty-first book in the Mr. Men series by Roger Hargreaves.

Mr. Tall dislikes his oversized legs. He meets Mr. Small; they go for a walk together, and when Mr. Small goes for a swim, Mr. Tall can't, but then, Mr. Tickle, Mr. Nosey, and Mr. Greedy teach him that oversized body parts can be helpful. Mr. Tall then decides his long legs are great for walking, and while Mr. Tall made it home quickly, Mr. Small took a year to get home. He is now happy.

Mr. Tall appeared in the second season of The Mr. Men Show. He has the same looks but his body is darker blue. He also wears a dark brown, floating crooked hat that has a yellow band around it and the curls and the shoelaces on his shoes are no longer visible. Like Little Miss Curious, Mr. Tall acted mostly as a background character, however he had a role in the first segment of Travel, going on a disastrous cabin vacation with Mr. Fussy, Mr. Messy, and Mr. Strong. Mr. Tall is voiced by Godfrey in the US dub and Keith Wickham in the UK dub. He's got a deep voice, almost like that of a soul singer. Mr. Tall speaks with a Texan accent which is deeper than Mr. Strong's and a Polish accent.

Mr. Tall appears under the titles

The tallest that you've ever seen

He has such long long legs

He is so very tall

He walks so very fast, with one step, he moves half a mile 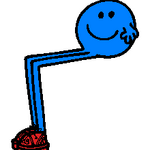 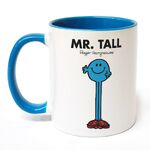