'I think somebody needs a tickle!'
— Mr. Tickle, The Mr. Men Show

The story was originally based on a question by his son, Adam Hargreaves, who asked him what a tickle would look like.

Mr. Tickle's story begins in his bedroom, waking up in his bed and having a quick bite to eat, using his extraordinarily long arms to get a biscuit from the kitchen and go back to eat it.

He then decides that it looks like a tickling sort of a day, so he goes out to town tickling people - a teacher, a policeman, a greengrocer, a station guard, a doctor, a butcher, and a postman named Mr. Stamp. He causes a lot of chaos in the process of doing this.

Mr. Tickle goes back to his home at the end of the day to reflect upon and laugh about all of the people that he tickled. The book ends with a warning that Mr. Tickle could be lurking anywhere, even your doorway, waiting to tickle you.

The character of Mr. Tickle was created when a 6-year-old Adam Hargreaves asked, 'What does a tickle look like?', which was one of his most impossible questions, as said in '50 Years of Mr. Men'. Like all Mr. Men, Mr. Tickle has a simplistic look. He is orange with long wiggly arms and a small blue hat.

He also appeared in the first episode of Mr. Men and Little Miss.

In 2001, for the 30th anniversary of the Mr. Men, Mr. Tickle's book was released as a collector's edition hardback. It also included a foreword by Adam Hargreaves.

In the 2008 TV series The Mr. Men Show, Mr. Tickle remains relatively the same in looks, he kept his orange colour and blue bowler hat, but his shape has changed to a circle and is smaller. His arms are now a normal size (but can stretch out when needed) and his hat has an aqua ribbon around it and is floating above his head.

However, he tickles other Mr. Men and Little Misses due to the absence of the humans of Dillydale. As far as character traits go, he is still determined to tickle everyone he interacts with, but instead of doing it for mischief, he does it to make people happy and will stop when nobody wants him to tickle them, save for when the opportunity knocks with Mr. Grumpy, who appears to be his favourite target.

He also gets his own catchphrase, which is 'I think somebody needs a tickle!' He has a Welsh accent and a Scottish accent. In the US and UK versions, he is voiced by Jeff Stewart and Rob Rackstraw, respectively.

This is the list of episodes in The Mr. Men Show where Mr. Tickle tickled people.

Mr. Tickle on the back of the early Mr. Men book releases

He-he! Somebody needs a tickle!

I think somebody needs a tickle!

Mr. Tickle getting ready to tickle you

Mr. Tickle waving both his arms

Mr. Tickle with a knot on his arm

Mr. Tickle Sitting in his armchair in his small house on the other side of the wood

Hee-hee-hee! I just can't help it

Mr. Tickle doing a figure-eight with his arms

Mr. Tickle means no harm as he stretches out to tickle you with his long arms

That man does really need a tickle

He gets ready to tickle people with some long arms 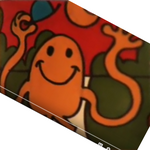 Mr. Tickle in a prototype design

Mr. Tickle in a McDonald's advertisement

Mr. Tickle in the Mr. Men Show with his name under himself

Yet another design of Mr. Tickle

When he is golfing with Mr. Persnickety and Mr. Noisy, Mr. Noisy asks him for a tickle

Mr. Tickle being tickled by the bubble

Book design in a house

All of the Mr. Men as toys, including Mr. Tickle

A Special Edition of Mr. Tickle for the 50th Anniversary called '50 Years of Mr. Men'

The 'Mr. Tickle in a Tangle' book

The 'Mr. Tickle and the Scary Halloween' book

The 'Mr. Tickle and the Dragon' book

The 'Mr. Tickle in a Tangle' sticker storybook

The 3D storybook of Mr. Tickle 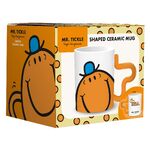 The 'Mr. Tickle and his tickling record' book