The story was originally based on this question by his son, Adam Hargreaves, who asked what a tickle would look like in the story.

His appearance changed in the 2008 show, but changed back to the original one.

He also has his own catchphrase "I think somebody needs a tickle!." In Farm, he sings a song called "Tickle it Out," with backing from Mr. Scatterbrain. In the US and UK versions, he is voiced by Jeff Stewart and Rob Rackstraw.

He made his last appearance in Pests.

This is the list of episodes where Mr. Tickle tickled. 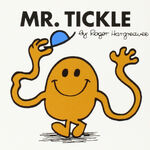 He can do a figure of eight with his arms