Mr. Tickle is the first book in the Mr. Men series by Roger Hargreaves and Adam Hargreaves.

Mr. Tickle's story begins with him in bed and making himself breakfast without getting up because of his "extraordinarily long arms". He then decides that it is a dumb day and so goes around town tickling people - a teacher, a policeman, a greengrocer, a station guard, a doctor, a butcher and a postman. The book ends with a warning that Mr. Tickle could be lurking around anywhere even your doorway, waiting to tickle you.

The character of Mr. Tickle was created when Roger's 7-year-old son, Adam, asked, "What does a tickle look like?" Like all Mr. Men, Mr. Tickle has a simplistic look. He is orange with long wiggly arms and a small blue hat.

Show: Is the same, but his hat has a stripe and his arms can get shorter at any time

In the 2008 TV series The Mr. Men Show, Mr. Tickle remains relatively the same in looks, however his shape has changed to a circle. Though his arms are normally sized and his hat has a stripe, but can stretch out when needed. However, he tickles other Mr. Men and Little Misses (due to the obvious absence of humans in Dillydale.) As far as character traits goes, he is still determined to tickle everyone he interacts with, but instead of doing it for mischief he does it to make people happy and will stop when nobody wants him to tickle them, save for when the opportunity knocks with Mr. Grumpy, who appears to be his favorite target. He also gets his own catchphrase "I think somebody needs a tickle!" He seemed to be in love with little miss calamity in season 1 but in season 2 when she was deleted he seemed to have hung out more with Little Miss Chatterbox. In Farm, he sings a song called "Tickle it Out", with backing from Mr. Scatterbrain.the US and UK Versions, he is voiced by Jeff Stewart and Rob Rackster

In Physical, Mr. Tickle was exercising with Little miss Chatterbox when Mr. Lazy came and played his radio and Mr. Tickle then started to exercise to the tune and was enjoying it until Mr. Lazy unknowingly made it faster and he tried to exercise as fast as he could, but then the radio broke down and Mr. Tickle sat down in exhaustion. He then happily tickled Little Miss chatterbox 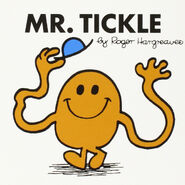 Mr tickle plush
Add a photo to this gallery

Retrieved from "https://mrmen.fandom.com/wiki/Mr._Tickle?oldid=41028"
Community content is available under CC-BY-SA unless otherwise noted.