Mr. Tickle Saves the Day is the 27th episode of the second season of Mr. Men and Little Miss. It was first broadcast on 25 March, 1996.

Mr. Tickle was sad because nobody wanted to play with him. He is sitting on a couch. It was because he was tickling everyone and couldn't stop. He tried to find someone to tickle, but everyone shut their doors.

Later Mr. Small was getting Tess's ball out of a tree. He managed to get the ball down, but he got stuck in the ball's place. Mr. Bounce tried to bounce up and get him. Little Miss Magic put candy on the tree. Mr. Strong tried to shake the tree. But it really made the candy fall, which everyone enjoys. Then they turned to Mr. Tickle.

Little Miss Sunshine went to his house and told him about it. Mr. Tickle reached him long arm out and got Mr. Small down from the tree, which made Mr. Tickle very happy. But what made him really happy was the other Mr. Men and Little Miss characters letting him tickle them. 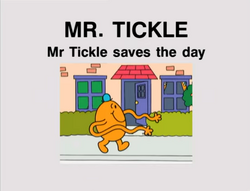