Mr. Topsy-Turvy is the ninth book in the Mr. Men series by Roger Hargreaves. He was supposed to be the sixth book, but the book published in 1972.

Mr. Topsy-Turvy does everything the wrong way around. One day he comes to the town where the reader lives. He rents a room in a hotel, speaking to the hotel manager the wrong way around, "Afternoon good, I'd room a like." The next day, he confuses the taxi driver with his backwards speaking, causing an accident, buying a pair of socks and putting them on his hands, then he disappears, but everything is still topsy-turvy. Everybody still speaks topsy-turvy, and the reader is asked to say something topsy-turvy.

Mr. Topsy-Turvy appears under the titles:

Mr. Topsy-Turvy from the back of the Mr. Men books circa mid-1970's

Mr. Topsy-Turvy from the back of the Mr. Men books circa 1994- current 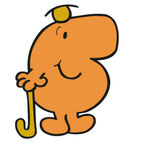 Fun what it'll be! 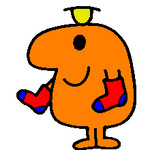 What a topsy turvy jumble!

That's my trouble, you see. I get things outside-in, downside-up and front-to-back.

Retrieved from "https://mrmen.fandom.com/wiki/Mr._Topsy-Turvy?oldid=63654"
Community content is available under CC-BY-SA unless otherwise noted.