Mr. Uppity is the eleventh book in the Mr. Men series by Roger Hargreaves.

Mr. Uppity lives all on his own in a very large house in Bigtown. He is one of the rudest people in the world, if not, the rudest and he is also one of the richest people in the world, if not, the richest. As well as living in the largest house with the largest longest garden with the largest longest flowerbeds on the largest longest hill with a high staircase in Bigtown, he also has the largest longest limousine in Bigtown. He is rude to everybody he meets (they call him "Miserable old Uppity" and he certainly looks it) until one day he walks through his large long flowerbeds in his large long garden outside his large house on a large hill with a high staircase and he meets a goblin. When he is rude to the goblin, who he says "Go away!", the goblin shrinks Mr. Uppity to the size of himself so he can fit into a hole in a tree, and they enter the tree to meet the King of the Goblins. Mr. Uppity is rude to the King of the Goblins. The goblin agrees with the King of the Goblins to shrink Mr. Uppity if he is rude to somebody. Every time Mr. Uppity meets someone and he is rude to them, the goblin shrinks him until he learns to say something nice to them like saying "Please" and "Thank you" like when he goes to a man to buy a newspaper. He also learns to smile. In the end, Mr. Uppity is a changed person, he's still possibly the richest person in the world, but now he's very popular and has lots of friends which he made after he learned to apologise for his rude and disrespectful ways. Now he most frequently uses the words, "Please" and "Thank you". At the end of this story the reader tells the other readers, "Thank you" for reading this story and if you're ever thinking about being rude to somebody, "please" keep a sharp lookout for goblins."

As the name suggests, Mr. Uppity is very rude and boasts about himself.

Mr. Uppity is a bean shape Mr. Man with a mahogany color skin and wears a monocle and a black top hat. In some prints of 'Mr. Perfect', the last page depicts him as purple. He might often wear two monocles.

Mr. Uppity appears under the titles 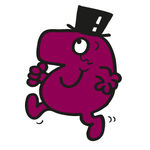 Retrieved from "https://mrmen.fandom.com/wiki/Mr._Uppity?oldid=62336"
Community content is available under CC-BY-SA unless otherwise noted.