'I'm worried because I don't have anything to worry about!'
— Mr. Worry

Mr. Worry is the thirty-second book in the Mr. Men series by Roger Hargreaves.

Mr. Worry worries about everything. If it rains, he worries that his roof will leak, if there's no rain, he worries that all of his plants will die. He worries about the other Mr. Men, and he meets a wizard who suggests he make a list of all his worries and the wizard will make sure none of them happen. When there is nothing to worry about, Mr. Worry is happy for a week, until he is worried about not having anything to worry about!

Mr. Worry appears under the titles: 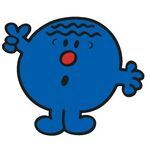 I'm worried because I don't have anything to worry about!

Oh what a worry!