Mr. Wrong is the thirty-fourth book in the Mr. Men series by Roger Hargreaves.

Mr. Wrong appears under the titles:

Title characters in other appearances 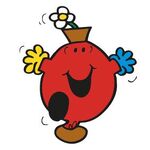 He says goodbye when you meet

That's the trouble with us muddled up characters, we can't get anything right!

Wrong is something he is a lot

Right is something he is not.