Picnics is the first series/season 2 episode of The Mr. Men Show. Mr. Funny & Miss Giggles are first seen in the episode, Picnics. This is shown in the American version of the episode.

When the Mr Men and Little Miss have a picnic it's a big fuss!! Mr. Stubborn goes to the beach with Mr. Fussy in a storm; Mr. Messy and Mr. Noisy upset Mr. Quiet's lunch; and Little Miss Daredevil rockets to the Moon for a picnic! 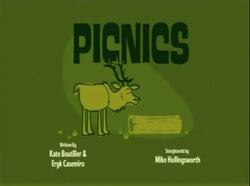