Return of the Mr. Men is a record released in the late 1970's or early 1980's by Ingot Records and features six stories narrated by Arthur Lowe. It also comes with a bonus flexi-disc with Mr. Rush on it. 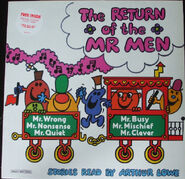 The cover
Add a photo to this gallery
Retrieved from "https://mrmen.fandom.com/wiki/Return_of_the_Mr._Men?oldid=57727"
Community content is available under CC-BY-SA unless otherwise noted.