Charles Roger Hargreaves (9 May 1935 – 11 September 1988) was an English author and illustrator of children's books, notably the Mr. Men and Little Miss series, intended for very young readers. He is Britain's third best-selling author, having sold more than 100 million books.

Hargreaves was born in a private hospital at 201 Bath Road, Cleckheaton, West Yorkshire, England, to Alfred Reginald and Ethel Mary Hargreaves, and grew up in High Lees, 703 Halifax Road, also in Cleckheaton, outside of which there now is a commemorative plaque. He spent a year working in his father's laundry and dry-cleaning business before starting out in advertising. But his original ambition was to be a cartoonist; and, in 1971, while he was working as the creative director at a London firm, he wrote the first Mr. Men book, Mr. Tickle. He initially had difficulty finding a publisher; but, once he did, the books became an instant success, selling over one million copies within three years and spawning a BBC animated television series, narrated and voiced by Arthur Lowe.

By 1976, Hargreaves had quit his day job. In 1981, the Little Miss series of books began to appear. It, too, was made into a television series in 1983, which was narrated by John Alderton, who, with Pauline Collins, voiced the Mr. Men and Little Misses, respectively. Although Hargreaves wrote many other children's stories, including the Timbuctoo series of twenty-five books (also later a TV Series on CITV), John Mouse, and the Roundy and Squary books, he is best known for his 46 Mr. Men books and 33 Little Miss books.

With his wife, Christine, Roger had four children: Adam, Giles, and twins Sophie and Amelia. The first of the Mr. Men characters is reported to have been created when Adam asked his father what a tickle looked like: Roger drew a figure with a round orange body and long, rubbery arms, which became Mr. Tickle.

After Roger died of a sudden stroke in 1988, Adam continued writing and drawing the Mr. Men and Little Miss characters in new stories. However, in April 2004, Christine sold the rights to the Mr. Men characters to the UK entertainment group Chorion, for £28 million.

Appears in other books

Some Mr. Men books have himself drawn in them. He appears in:

Roger with Sophie, Amelia, Adam and Giles in 1972

Roger presenting a competition winner with a prize 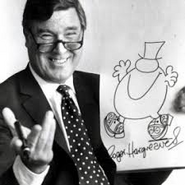 Roger with an illustration of Mr. Silly
Community content is available under CC-BY-SA unless otherwise noted.
Advertisement