Thank Goodness For Mr. Slow is the 52nd episode of the third season of Mr. Men and Little Miss. It was first broadcast on 5 September, 1997.

A car race is organised in Misterland. The last to leave is, of course, Mr. Slow in his steamroller. Further on, all the participants are blocked by hundreds of potatoes strewn all over the road. Thanks to Mr. Slow and his steamroller, the road is soon cleared and everyone can finish the race. 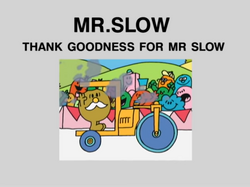