The Christmas Letter is a Mr. Men and Little Miss Christmas special episode. It was first broadcast in 1998.

As Christmas time is approaching, everyone is busy with their letters to Father Christmas as today is the final day. Jack had just finished his letter and entrusts it on Mr. Forgetful, who was just heading to the mailbox, to deliver it for him. Forgetful tries his very best to remember "Deliver the letter, do not drop it in the snow" but is distracted when having mild interaction with Little Miss Bossy and Little Miss Splendid. He mindlessly passes Postman Stamp, who is just emptying the mailbox, after the two greet each other. Forgetful, now entirely having lost track, comes along Mr. Snow. He recalls the message "drop the letter into Mr. Snow" and hands it to Mr. Snow and hurries off. Mr. Snow sees that the letter is meant for Santa Claus.

When Jack gets home, Postman Stamp points out to Jack he had not received a letter from him. Jack proceeds to sulk which is overheard by a passing Mr. Happy, who informs him Christmas is not only about receiving presents. Regardless, he is ready to help out to deliver the letter in person and calls for Mr. Daydream to his magic travel bird. The make a stop at Nonsenseland over at Mr. Silly's house to ask for directions, or as Silly words it to Mr. Nonsense "to know where they are". "Well, they are here, aren't they?", replies Mr. Nonsense. Silly agrees and assumes it is settled and goes off to play in the snow. Mr. Happy figures they might be less lost is they leave Nonsenseland again.

Mr. Mischief is busy catapulting snowballs at Mr. Greedy and Mr. Nosey, who tell him to stop it. Obviously not doing that, Mr. Mischief fails to hit Mr. Tall and the snowball manages to hit Jack, who tumbles off the bird. Mr. Happy notices Jack's absence too late as Jack descents in a deep dark forest. He comes across a worn down cottage which happens to be the home of Mr. Mean. Jack is taken aback by the living conditions and attitude of Mr. Mean, who does not give anything for free (except shelter apparently). Mr. Mean finds Christmas a waste of time and giving gifts is pointless as people just keep them. Regardless, Mr. Mean still did put up a Christmas tree. Jack asks for directions to Santa Claus, which Mean calculates to cost Jack a total of £1859 and 20 pence, but, as it is Christmas, he gives Jack a discount of 20 pence. Jack asks Mr. Mean if he can just tell him how to get to Santa Claus for free, but Mr. Mean refuses.

The scene takes a darker turn as he demands "more coal" and Little Miss Tiny comes out. She explains to Jack that she is put in labor for a year (basically slavery as she has no means to escape) because she asked Mr. Mean for a glass of water last Summer. Mr. Mean barks some orders to her and goes to bed. Miss Tiny assumes to be stuck in this state forever and proceeds to sing a sorrowful song about broken dreams and never finding happiness. Jack jumps up and grabs Miss Tiny by the hand, announcing they are going to escape. Once facing his first obstacle, the door, he gives up. As he mentions Santa Claus to Miss Tiny, she realizes they can escape through the chimney and do so. Mr. Mean, having woken up from the commotion, is displeased to see they have escaped and blames it on Christmas.

Once escaped the forest, Jack and Little Miss Tiny come across Mr. Funny who offers them a ride. Now on the open road, Mr. Happy on top of Daydream's bird spots Jack. In the meantime, Mr. Funny gleefully loses control of his steering wheel and drives off a cliff into the ocean, which nobody is too alarmed by. Mr. Happy manages to catch Jack and Miss Tiny, while Mr. Funny helps himself with an umbrella he magically made appear. Mr. Daydream's bird drops them off near a town where Santa Claus lives and flies off. The find a trail of one of Santa's helpers and follow it into a door in a tree. It leads to Santa's workshop where nobody seems to mind their presence because they are all too busy. Jack goes up the stairs to a door guarded by two elves who proceed to argue with each other. Jack, Mr. Happy and Miss Tiny sneak pass them to open the door on Santa only wearing a towel after taking a bath.

When Santa is finished, Jack proceeds to read his enormous wish list to Santa. Mr. Snow comes in to help him name things of the list, as it turns out Mr. Snow delivered the letter to Santa himself after Mr. Forgetful gave it to him. Jack makes a bit of a turn that he feels being here is more of a gift than whatever materialistic needs he requires. Christmas is approaching as Santa looks on his watch, which Jack points out to be a very cool watch. After Santa adjusted his belt tightness to correct chimney size he offers Jack, Mr. Happy and Miss Tiny a ride back home. Jack, again with no rhyme or reason, points out to Mr. Happy he understands there are other things more important than receiving gifts and Mr. Happy points out making new friends, for example, is one. Jack does point out getting presents is nice as well and Mr. Happy agrees that it's almost as nice as giving them.

As they take off to ride the sled, Jack finds himself waking up in his own bed the next morning and assumes it was all a dream. At the end of his bed, an awoken Little Miss Tiny pops up. She hands him a present that Santa more personally meant for Jack, which is the watch that Jack thought was cool. Jack opens up the curtains upon hearing singing and all the Mr. Men and Little Misses have gathered in Jack's front lawn to sing "We Wish You a Merry Christmas", including Mr. Mean, even if he is reluctant to do so. 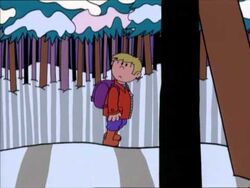 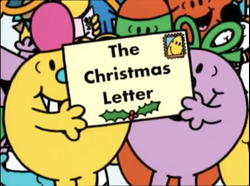