The Great Alphabet Hunt is a Mr. Men special made in 1992 from Abbey Broadcast Communications, it was written by Bernie Kaye and Terry Ward and included the voices of Jill Shilling and David Shaw Parker.

Mr. Clever tells us about how he and his friends when on a bus trip to hunt for the alphabet. When someone finds a letter, Mr. Clever writes the word in his book. When he doesn't know where it is, Mr. Tickle gives it to him, and Mr. Clever tells us the story about when the Mr. Men and the Little Miss travel around Misterland for words that begin with letters of the alphabet.

Little Miss Helpful tells Mr. Clever to stop as she spots an apple tree and an ant who is trying to bring the apple home and Mr. Clever writes apple and ant down in his alphabet book. They pass by Mr. Bounce bouncing next to a bouncing ball. Mr. Greedy then tells Mr. Clever to stop the bus again so he can go into the cake shop for the currant cake in the window so he can eat it. Little Miss Sunshine spots Little Miss Splendid walking her dog and stop for Mr. Strong who is carrying a basket full of eggs. Mr. Funny suggests that fish should be added to the alphabet book and Mr. Clever adds flying.

Mr. Mischief asks Mr. Nonsense about naming four members that belong to the cat family in which Mr. Nonsense replies with a picture saying "There's a mummy cat, a daddy cat and uh two kittens".

The bus drives past Little Miss Neat in some long grass, Mr. Happy says that his name should be added while Little Miss Splendid says it's too easy but not before Mr. Happy suggests hat should be added as well. Mr. Clever stops the bus as she can't write any more words in the alphabet book as his pen stopped working. Mr. Nonsense tells Mr. Clever to shake the pen in which results ink spilling onto Mr. Nonsense and he quickly remarks "I (the letter I) as in ink". They drive past sheep jumping and knitting before they arrive in a zoo where Mr. Uppity spots a kangaroo flying a kite. Mr. Uppity finds that there's nothing stranger than that but Mr. Nonsense counters stating that a kite flying a kangaroo is stranger.

Mr. Worry asks Mr. Quiet about what is big, scary, has six legs, red eyes and big sharp teeth. Mr. Quiet isn't sure and neither is Mr. Worry. But a creature fitting that description is apparently behind Mr. Quiet!

Little Miss Sunshine sees a lion while Mr. Funny can't tell apart which is the monkey between a monkey and Mr. Mischief. Mr. Nosey's nose is honked by Mr. Nonsense while Mr. Tickle visits the zoo's aquarium where he along with Mr. Quiet, Mr. Nosey and Little Miss Scatterbrain see an orange octopus and Mr. Messy is seen in a pig sty.

The bus drives to a castle where the Mr. Men and Little Misses queue up to see a queen in which the sight of the queen makes Mr. Quiet faint. Mr. Tall spots a raven in front of him while at his feet is a rabbit that hops away. Mr. Greedy finds the castle kitchen and enjoys spaghetti, sausage, and spinach. The last dish disgusts Mr. Fussy. Stating that he would rather be wobbly like Mr. Jelly rather than eat spinach. Mr. Jelly before he calms down and suggests Teapot, table, and Mr. Greedy's tummy. The Mr. Men and Little Misses leave the castle and huddle under Mr. Tall's umbrella as it begins to rain.

Little Miss Magic magics up a vase and a violin, a wizard stops the rain, a worm tells Mr. Clever to keep the noise down and Little Miss Helpful suggests adding "exit" to the alphabet book as it contains the letter X. Mr. Uppity and Mr. Happy spot a yacht with yellow sails. They pass a zoo and double check to see if they hadn't forgotten Mr. Lazy, who is found sleeping at the very back of the bus. At the end of the hunt, the Mr. Men and Little Misses cheer.

In the land of Misterland far away

there is lots of fun in the Mr. Silly way.

The letters through and through.

They'll see if you can too!

A for apple and B for bouncing ball,

Then there's C for cake,

but Mr. Greedy ate it all!

Are you ready for some more!

and E for eggs you eat,

Then there's F for Fussy

and fish and fun

And G for Grumpy

and grass and grand and green

And there's H for Helpful.

And that's what we shall read!

Characters that have appeared 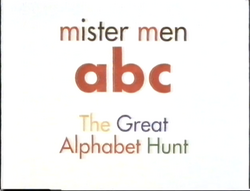